Does anyone else feel as if the world has just become like a girl on her period? Overly sensitive and emotional as hell. (Even this post would offend certain people lol)

I keep thinking about how we used to have the ability to say whatever we want and feel how we want and think with our own brains. These days it’s like aaaahhh! you can’t say this or that or someone might be offended or that’s cultural appropriation. Like what even is that and who the hell cares??? People should have the freedom to wear their hair however they like, or wear a scarf or whichever accessory they want. 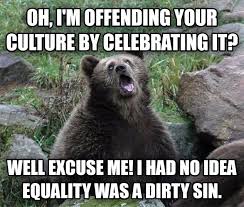 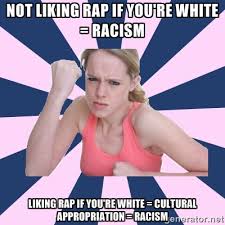 I think sharing your culture should be a beautiful thing. Wearing feathers in your hair or braiding it or whatever the hell you want, I dunno, just do it.

But THIS is not cool…

And THIS is especially horrific…

But in other instances, it’s just unneccessary.

I don’t mean to go on another rant but I read the news a lot, including celebrity news, and it just annoys my life how people get emotional over the dumbest shit you can ever imagine. Like Vanessa Hudgens got told off for wearing a dream catcher in her hair. Regardless of the fact that she is apparently of Native American descent, it shouldn’t matter. How many people have dream catchers over their beds? It’s the same damn thing. Oh and don’t get me started on people going off at Kylie Jenner for having her hair in cornrows. It’s a hairstyle for goodness sake, if she can’t do cornrows because it’s a “black thing” then black people shouldn’t use a telephone ’cause a freaken white guy invented that!!! And don’t EVEN tell me I’m racist. I’m only making a point.

People need to quit with this stupid “cultural appropriation”, it’s only a means to separate people even more and push agendas down our throats. Like this is your culture, you keep it to yourself and this is mine and I’ll keep it to myself. Its proof of how powerful the higher-ups are that they make people think they are forming their own opinions about certain things when it’s really their (the higher-ups) ideas.

Its bullshit, every culture is beautiful in its own right. Share it, love it, live it and enjoy your life!